Check out how Kai Jie and Jiching brought the outside in to their flat at Telok Blangah! The one thing that struck Kai Jie and Jiching when they first entered their 4-room flat at Telok Blangah was the view of the sea and lush greenery from the living room window. The delicate blues and calming greens of the landscape gave them the idea to go for an interior design concept that could ‘bring the outside in’ to their home.

Their love for design and art helped them actualise their dream of creating a nature-inspired home. They enjoyed the process immensely, as it was an outlet for them to express their creativity.

“We drafted several moodboards, but everything was fundamentally Scandinavian with a muted palette,” Jiching explained. Just like how the couple were inspired to bring the elements of the surrounding landscape into their flat, Scandinavian design is also about paying homage to nature by including natural materials like wood, and adopting subdued tones like grey and green.

The artworks created by Jiching are displayed in the living room

Wooden furniture, plants, and cosy textiles are interspersed throughout their home to create an atmosphere of being one with nature.

While they hired an interior designer to create the permanent fixtures in their home, like kitchen cabinets, wardrobe and bed frame, everything else was the couple’s own effort; from sourcing for décor items, to even painting the feature wall in their living room!

They picked the shade of forest green for the feature wall to complement the wooden TV console that they bought from Ethnicraft. Jiching also created a series of minimalist-themed artworks using only 4 materials – gold spray paint, marker, white paper and a photo frame. With just a few strokes and sprays, she created an art collection that now adorns their living room wall.

A mixture of simple wooden and eclectic Asian-influenced furniture

Jiching liked the embroidery on a traditional Burmese costume, so she turned it into a cushion cover

Kai Jie and Jiching also share an inclination for décor items that hold a cultural significance. Some of the notable pieces in their home include a batik-patterned chair, and a cushion that was repurposed from a traditional Burmese costume. While it is atypical for a Scandi-themed home to have such elaborate motifs, it is also what makes their home truly unique.

These dome-shaped pendant lights are staples in Scandi-themed homes

Their bedroom, in particular, epitomises the concept of ‘less is more’. Despite the spaciousness of their bedroom, as they had hacked the wall separating it from the adjacent room, the décor is kept to a minimum. “Our interior designer advised us not to add too many things in the room,” Jiching shared.

The couple wanted a simple, yet functional bed that allows them to do work on their laptops at the side

Again, we see form following function in the design of their bedframe. There are no fancy headboards or fixtures, just a sleek table extension that allows them to do work on their laptops.

Kai Jie and Jiching shared that the advantage of sourcing furniture on their own was that it gave them a tighter control over their budget. They offered a great tip, which is to attend the last few days of the annual International Furniture Fair (IFFS), because the vendors who exhibit furniture during the fair would start slashing prices to clear out their stock. In fact, most of the items in their home, like the gold-coloured coffee table, and paintings in the dining room, were bought on sale from the fair.

They also suggest measuring the furniture you are interested in before buying them, and ensuring that it can fit into the lift at your block. Especially since Kai Jie and Jiching live on a high floor, carrying large furniture items up the stairs is not really an option.

To the couple, designing their flat and transforming it into a cosy home was one of the most exciting things about being first-time home owners. “We wanted to create a home that is uniquely ours, and we are proud of how it turned out,” Kai Jie shared. 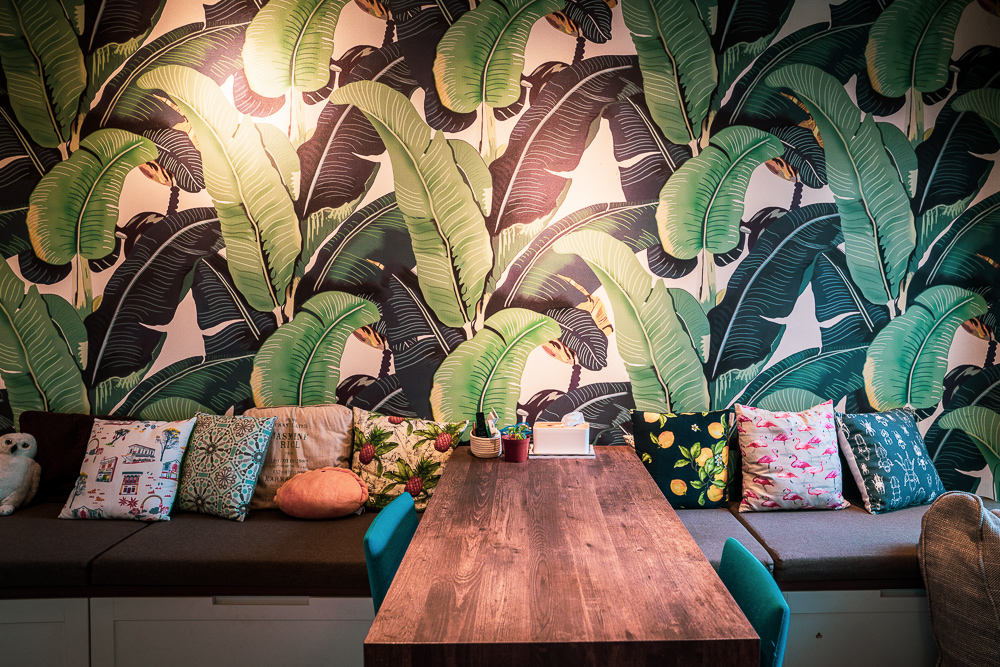